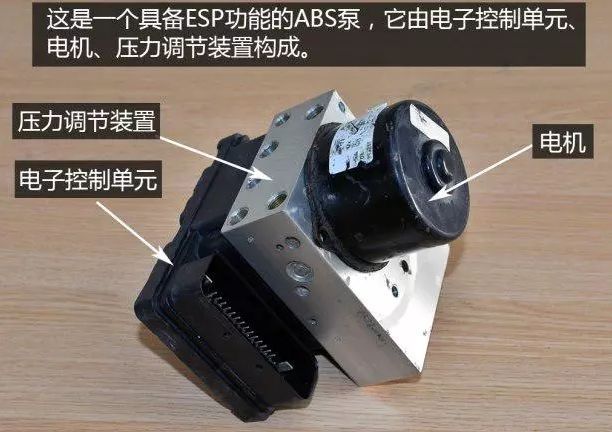 Lifespan is only one day, but it can last a lifetime? This amazing car part!

In our car, there are many equipment that does not work under normal conditions, and once it starts to start, it must be an emergency! The easiest thing to think of is "airbags." In addition to this 22445, there are many similar equipment in the car, today Xiao Bian came to understand one of them - ABS pump.

one. What is ABS pump

The full name of ABS is the Anti-locked Braking System, which is the so-called "anti-lock brake system." As its name implies, its function is to prevent the tires from being locked in the brakes, and it also has a non-slip effect. At present, most vehicles are equipped with such a system.

As a "short-lived" device, its function is only effective when the car is about to lock up. The working time is only a few seconds, and it has been in "standby" since then. In use, the driver will feel the brake pedal a little "bounced" and will also give off some friction.

For example, when an abnormality occurs in the steering of a vehicle, a separate control system can control the corresponding wheels. If three or two channels are replaced and two or two control wheels are used, the adjustment process will be troublesome and the result will be poor. .

two. How long is ABS life

The main driving force for ABS to improve its work is the motor, which is usually about thirty hours in design. In fact, the design of such a short time is not because of technical problems, but in terms of the overall use of the vehicle, 30 hours is enough for the basic use of the ASB, not to mention the vast majority of people almost no ABS.

If we don’t believe it yet, we can calculate a formula.

For example: If we use an ABS once every three days on average and throw away external forces, we keep the speed at 80 kilometers per hour until the brakes stop completely, and the working time of ABS is about four seconds. We have been driving for fifteen years, so the total ABS has been running for about two hours.

Therefore, if we use the "lifespan" of thirty hours, this use is only less than 10%. Therefore, we do not have to worry about the insufficient life of ABS. It is more than sufficient.

three. Relationship between ABS and ESP

Theoretically, these two are a concept. It is impossible to find ESP equipment in our vehicles. The safety devices that are seen in various publicity in life, such as ESC/ESP, ASR/TCS, etc., actually they are All of them are higher-level and accurate functional systems in ABS settings. They are all improved motors to improve kinetic energy and used together with solenoid valves. Faced with more and more safety control systems, the pump body and the steering unit must have a longer service life and maintain better stability.

In short, in a hardware device, the cost of owning a stable system and only anti-locking function of a car will not be much different, and their difference may be reflected in the software performance. The popular point is the operating procedure. . Every manufacturer designing a car, the manufacturer of the braking system will give them a variety of operating options. The manufacturer will select the stable system and other devices that the vehicle needs to be equipped with according to its own design and market direction.

Indeed, the cost of each function, from design to R&D, is often very high. The more functions the system has, the more advanced the experiments need to be, and the more cost the manufacturer needs.